Refusing to Provide a Specimen

Failure to provide a specimen is a single offence but can be committed by refusing to provide a specimen of breath, blood or urine. It is one of the most complex areas of Road Traffic Law so we have summarised the key points below so you can widen your knowledge of the offence, but for a more personalised answer to your questions please feel free to contact us.

Please remember that at no stage will the officer or the Crown Prosecution Service need to prove that you drove the vehicle. If following an attempt to provide a specimen of breath, no samples or only one sample has been provided, the device operator has a choice whether to restart the process or charge you with the offence. 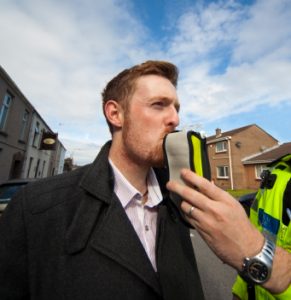 The law on refusing to provide a specimen

The law regarding the offence of failing to provide a test specimen is governed by the Road Traffic Act 1988. There are three separate types of offence that can be committed with regards to failure to provide a specimen:

1. Failure to participate in a preliminary test

This applies if you refuse to participate in a roadside breathalyser test or sobriety test when asked by a uniformed police officer. The punishment for failing to co operate in a preliminary test is four penalty points added to your licence for four years, or a driving disqualification and also up to a £1000 fine.

2. Failure to provide an evidential specimen for testing

An evidential specimen is required when you are detained in connection with a drink or drug drive offence and is conducted at a police station after an arrest has been made. It is an offence to refuse to provide the required breath, blood or urine sample at this stage. The punishment for failing to provide an evidential specimen after driving or attempting to drive is a driving disqualification and an unlimited fine, with potentially six months imprisonment. If convicted of a similar offence within 10 years a mandatory minimum three year minimum driving disqualification will be imposed. The punishment for failing to provide an evidential specimen after being arrested for being drunk in charge of a vehicle is 10 driving licence penalty points or a driving disqualification, and a fine of up to £2,500, plus potentially three months imprisonment.

3. Failure to give permission for a laboratory blood test

Under the provisions of the Road Traffic Act 1988 only a uniformed police officer can conduct roadside sobriety tests and is entitled to do so if they reasonably suspect that a person:

The prosecution for the case must establish that the attending officer had reason to suspect that a person has committed an alcohol related traffic offence which can be a number of things:

The attending police officer is entitled to arrest the driver if they show higher than 35 micrograms of alcohol in 100 millilitres of breath from their preliminary test, if the driver refuses to provide a preliminary alcohol breath test or if the attending officer suspects that the driver has alcohol or drugs in their system and is in charge of a motor vehicle on the road or in a public place.

In order for the police to prove their suspicion that a drink or drug drive offence has been committed, they will need to carry out additional tests at the police station. These evidential tests require that two breath alcohol samples be taken using one of the evidential breathalysers such as the Camic Datamaster or Lion Intoxilyzer, which are more accurate than the roadside breathalyser machines. The lower of the two results will be used and the other one discarded.

The administering of the evidential breathalyser test will need to be postponed by 20 minutes if the suspect has; consumed alcohol, used mouth spray or wash, taken any medication, eaten, inhaled or taken anything within 20 minutes before the test. If they have been exposed to CS gas or pepper spray a period of 30 minutes should be given between exposure and the administering of the test. It is the duty of the police to ask the suspect if any of the above circumstances apply and administer the test accordingly.

Although having a blood alcohol level of over 35 micrograms per 100 millilitres may result in an arrest for drink driving, the standard prosecution level is 40 micrograms per 100 millilitres. If the evidential breathalyser test shows below 35 mg per 100 ml then the suspected drink driver will not be charged with an offence and will be released. A reading of between 36 and 39 mg per 100 ml will generally mean the suspect is released with a caution, however the police may consider using a back calculation in cases where they suspect a driver’s blood alcohol level was above the limit at the time of the offence, but shown as below by a evidential breathalyser. Should the evidential breathalyser result be over 39mg per 100 ml then the driver will usually be charged with a drink driving offence.

The use of a breathalyser machine is the primary means of providing an evidential alcohol blood test, however there are circumstances where the police may require a more accurate blood or urine sample.

1. If there is a large difference in the results of the two evidential breathalyser tests then the results may be deemed unreliable and the police may retake the test with another machine, or request a blood or urine sample.
2. Should there be no evidential breathalyser machine available at the police station they will require either a blood or urine sample.
3. If the suspect states they have a medical reason for not providing a breath sample such as a chest condition then the police will request a blood or urine sample. Only if the medical reasons for not providing a breath sample are judged to be valid will a urine or blood sample need to be produced.

Refusal to provide a specimen on religious grounds is not deemed as being a reasonable excuse and may result in a charge of failure to provide an evidential specimen. It has also being established that waiting for legal counsel is not a valid excuse for refusing to provide a specimen. However, if there is a solicitor immediately available and if consulting them would delay the test by a short period of time the advice and subsequent delay may be allowed.

There are a number of factors which could mitigate any refusing to provide a specimen charge. The law states that a failure to provide a specimen charge can only be made if the driver is without reasonable excuse for a sample not to be taken. If you are unable to provide a test sample due to a medical condition such as a chest issue for breath tests, phobia of needles or blood for blood tests, or another condition preventing the giving of a urine sample then mitigating circumstances will be taken into account. However, in order for this to be taken into account a medical practitioner will have to verify that the reason given is genuine.

The police must also follow the correct procedure when conducting drink and drug drive assessments; their failure to do so could be important for a defence case. Should you not understand the police requirements; for example if they do not speak English then this could be deemed as a reasonable excuse. If convicted the Court may grant a 25% reduction in the period of driving disqualification if the offender attends a drink driving rehabilitation course.

The importance of legal advice

The law surrounding drink driving and the testing required to establish an offence is multifaceted, complex and requires procedures to be followed to the letter, as the consequences for falling foul of the law can be life changing. It is very important for your livelihood and standard of living that you get the best legal advice with which to prepare yourself. We specialise in motor law and we know how best to save you your driving licence. If you have been charged with a failure to produce a specimen offence then please contact one of our driving solicitors who can advise on the best course of action.

Alternatively, if you wish to contact a member of our team fill in the ‘request a callback’ form and we will be in touch with you as soon as conveniently possible.

Want to speak to someone over the phone?